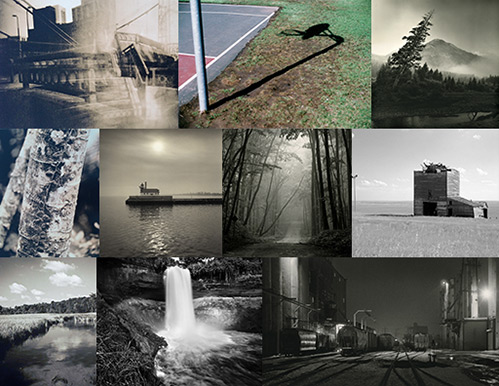 Friday night, we exhibited a modern interpretation of landscape photography in Landscape: Current Interpretations X=11, a group exhibition featuring works by local photographers working with traditional cameras and materials. This was the second exhibition in 2013 by Midwest Passage, a collective of Twin Cities photographers that favor film as their primary photographic capture media. Subjects ranged from more traditional representations of the landscape theme to hand-crafted, alternative/historic process, and abstract prints.

The exhibit was one night only on Friday July 26 from 6pm-10pm at Studio #201 in the California Building located at 2205 California St. NE, Minneapolis, Minnesota 55418

I live in Minneapolis Minnesota and have a passion for making portraits with view cameras and large format black and white film. In the last ten years, I have been drawn to older film cameras and large film formats up to 8x10 inch negatives. I also spend a fair amount of time perfecting recipes for home-made pizza and vegetarian soup. When not engaged in the aforementioned pursuits, I think about which mountain I will hike next.
View all posts by scott →
This entry was posted in Photography. Bookmark the permalink.