1. When did you first get interested in pinhole photography and how long have you been practicing this art form? List any creative influences that have shaped your own personal style.

In 2005, I came across a pinhole photograph for the first time. I can’t remember the particular photo, but I remember being amazed at the unique quality of it. Although I didn’t know it at the time, as a photographer I was searching for a way to express myself in a simpler, more tactile way. I had grown weary of staring into a computer monitor while endlessly working in Photoshop. I then had the good fortune to find f295.com, the up and coming premier pinhole forum. At f295, I found a wonderful community of pinhole photographers freely sharing their images, experiences and helpful knowledge. After some brief research, I taped a black cardboard box to a Holga Polaroid back, climbed onto the roof and made my first pinhole photographs. 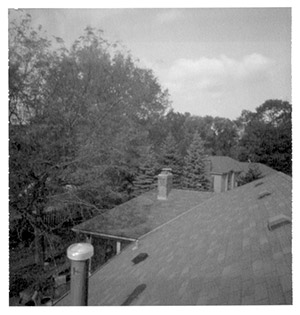 After some trial and error—and a lot of Polaroid exposures—I finally made a successful image. I was fascinated with the process of making a decent photograph by placing a hole in front of a piece of film or photo paper. I also found that by building simple cameras from foam core, or modifying existing cameras, pinhole photography was a way to gain a deeper understanding of the basics of photography. It’s one thing to select a lens and set the aperture to shoot a picture. It’s a much more comprehensive experience to design the combination of focal length, aperture, film size, angle of view, etc. to make a particular kind of image. I realized that I truly enjoyed the level of conceptual involvement necessary to make the kind of pinhole photographs that I wanted to make. As far as influences, I didn’t really have any particular influences other than the f295 forum, so I shot whatever I saw and continued to forge my own style. 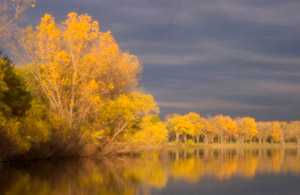 2. Which characteristics of pinhole are most attractive to you and applicable to your work?

At first, I shot as if I was using lenses, and many of my images were too static. It became important to me to make images that displayed the advantages of the pinhole medium. As I gained experience, I found that just because an image is made with a pinhole doesn’t necessarily make it interesting. As a natural result, my work became increasingly abstract, focusing on motion, macro, patterns, and “ghosting”. These are subjects where shooting with a pinhole can be a clear advantage over shooting with lenses. Now, I try to think more about the subject and ask myself, is there something about this that will make it better if I use a pinhole? If the answer isn’t a resounding yes, then I either use a lens, or make another espresso.

I never tire of images with water in motion or ghosting. I also have a fondness for near-far subject relationships. When I use lenses, I really enjoy the “bokeh” (out of focus areas), especially with older lenses. Occasionally, I try to achieve a bokeh-like effect in pinhole photography. However, isolating a subject from the background can be a challenge with a pinhole. It’s funny, once you shoot a lot of pinhole, you find yourself making some of your lensed images more like pinhole, and vice-versa.

I think my favorite image concept is the combination of static and random elements, whether it is an urban street with solid buildings and people in motion, or a stream with static rocks and the foamy patterns of moving water. This combination of elements: the predictable and the random, makes shooting pinhole photography an intellectual exercise of trying to imagine something that can’t be seen in real time. I like that part of it a lot. 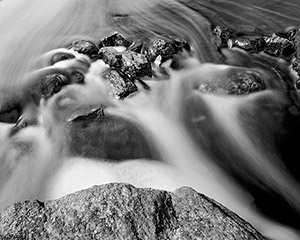 3. Which new techniques would you like to experiment within the year?

I would like to dive into alternative processes and printing. I have contact printed a few 8×10 paper negatives so far, but I would like to contact print film and see where that leads me. I like the results that I get from enlarging negatives onto photo paper, but I feel that it’s time to take it further, or is it back to the past? I’m a big fan of the era that includes Stieglitz, Weston, Adams, Henri Cartier-Bresson, Man Ray and others, and I’d like to make some images that evoke the period of the late 1800’s into the mid 1900’s. 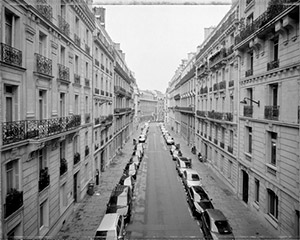 4. What creative tools and techniques do you use, such as any specific cameras, film, development, or printing processes?

I use a variety of cameras with film formats from 35mm to 8×10. I also use a digital SLR once in while. Most of the time, I shoot and process black and white negative film, but sometimes I shoot E6 transparencies or C41 color film, even paper negatives on occasion. For the final print, I try to make wet prints whenever possible. However, if a negative needs significant retouching, I’ll scan it and edit away in Photoshop. As far as cameras go, I get a creative boost from reconfiguring existing equipment into a new focal length or format size. My go-to cameras are an Mamiya RB67 Pro-S, or a lightweight Gowland Pocketview 4×5. I also use a Pacemaker Speed Graphic with 4×5 sheet film or a 6×9 roll film back.

The use of ground glass, viewfinders or SLR’s in my work is pretty common. It’s important to me to compose the photograph as accurately as possible. If I’m going to build or modify a camera, load sheet film and film holders, stand around in public with a camera that may look like a relic or land survey equipment, I want to make sure that I get the shot the way that I visualized it. It’s a lot of work to get a good image, and I like the piece of mind that I get from seeing through the pinhole or using a viewfinder. I have seen many good photographers get great results using only lines painted on their cameras. I like using viewfinders and ground glass. 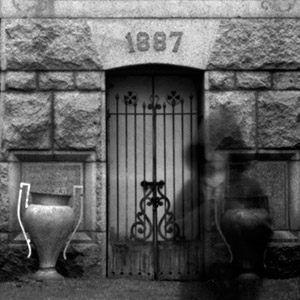 5. Why is pinhole photography important to you?

Pinhole photography has been very important to me in my development as a photographer. It has pushed me to go beyond previous boundaries and explore subjects in a way that I would not have done otherwise. It also provides for interesting situations as you compose and shoot the required long exposures. Once, I had to stall a few security guards in a Paris train station so that I could finish an exposure lasting six minutes. With the tripod behind me, I saved the photo by trying to converse with the guards using my poor French language skills. After they walked away, I just looked busy for a couple minutes and rummaged through my camera bag until the exposure was over. It sometimes helps to use a camera that doesn’t look like it’s even capable of taking a picture. 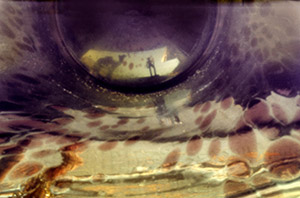 Cowboy and Camel Reflected in a Lizard’s Eye

Finally, it’s fun! Where else can you meet eclectic people making photographs using a box and a hole, talking about electron microscope apertures, film reciprocity failure, dark slide hijinks, CAD camera designs and spread sheets to calculate the right exposure? The combination of Spartan-style simplicity and modern technology is semi-hilarious. In the digital age, anyone can press a button and take a technically reasonable picture. Lensless photography allows you to make photographs with nothing more than a light-tight box, recording media, a good round hole, and some imagination. The resulting images are unique and wonderful! 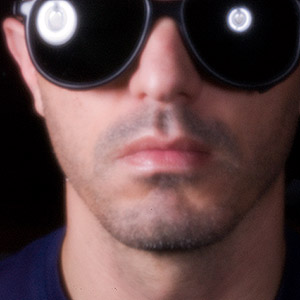